You are Part
of the Story

Check back weekly for updates

At Uncommon Schools, students engage with the stories and perspectives of Black Americans throughout the year. And, we love this opportunity to further celebrate the roles of Black Americans in history, culture, innovation, and society. Throughout February, we'll share opportunities to expand your knowledge of the past, as well as celebrate the voices that will shape our future by turning the spotlight on our teachers, leaders, students, and families. 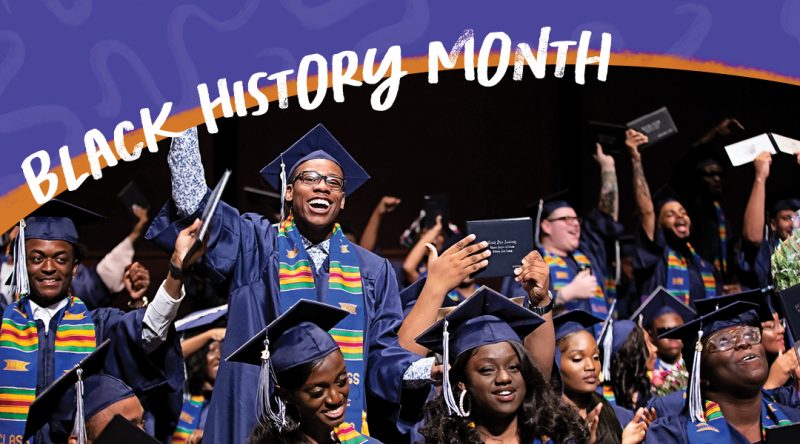 What does Black History Month mean to you?

In honor of Black History Month, we want to continue celebrating the beautiful perspectives and stories of the Uncommon community— staff, students, and families. Collected responses will be shared on Uncommon's social media throughout February and are an opportunity to highlight what Black History means to each of us.

As a Black man in today's America, Black History is vital to my identity. The older I get and the more I experience, the more I am excited to learn about Black History because it's important to understand why I sometimes get treated the way I do today. I believe that it's of utmost importance for Black children to learn Black history at a young age, so that they can walk with pride and make calculated decisions regarding their education, professional development, and relationships. 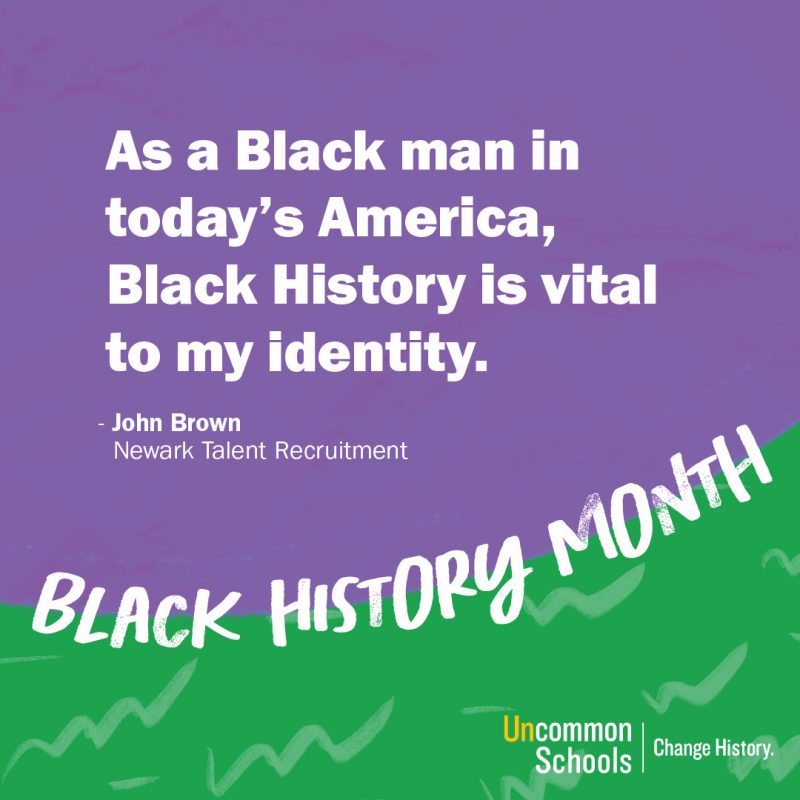 As a Black phenomenal woman, Black History means a time of reflection, celebration and preparation. 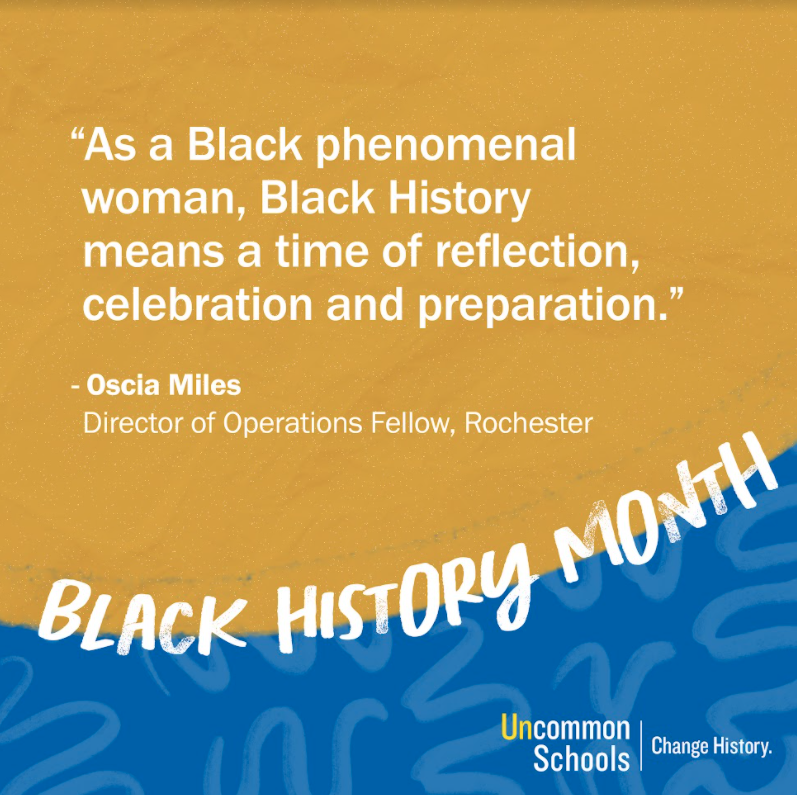 As an HBCU grad and musician, Black history means a great deal to me. Growing up, I always had a special appreciation for Black history as I would dress up in community Black History Month performances as one of the luminaries of the Civil Rights Movement (Malcolm X, MLK jr. etc) or a seminal early thinker/leader like Frederick Douglas, W.E.B. DuBois, etc. As I grew into myself and attended Howard University, I learned more about the silent leaders who were behind the scenes but made an indelible impact on Black Americans just the same. As a Director of Operations Fellow and a leader in a school with such a large population of young, gifted, black scholars, it means so much to show up as my best self each and every day to be not only an inspiration but an encourager that pushes our youth to become the best they can be as well. 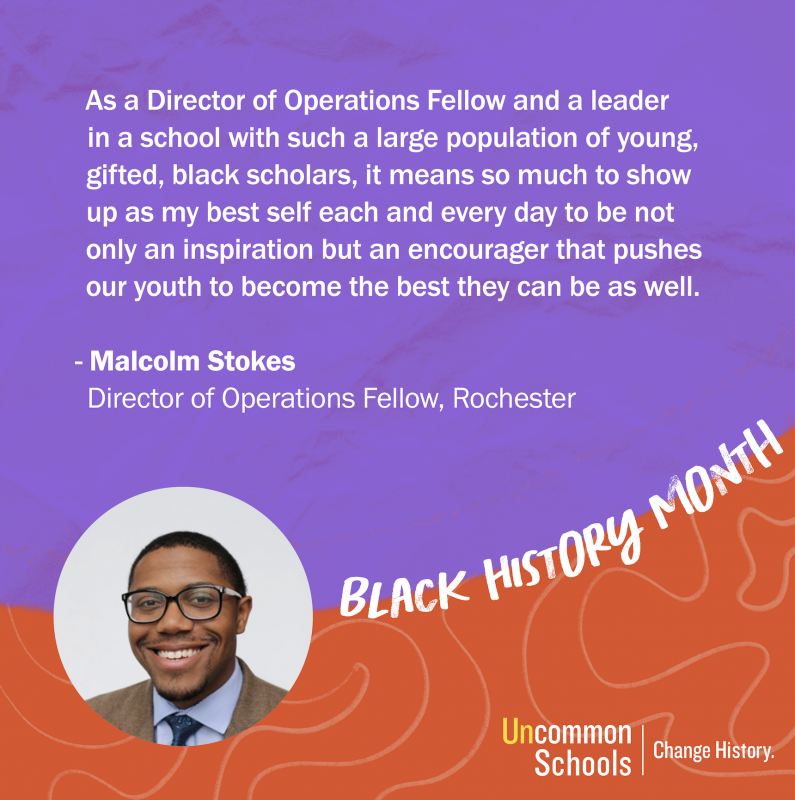 Week 5: Music from the Diaspora 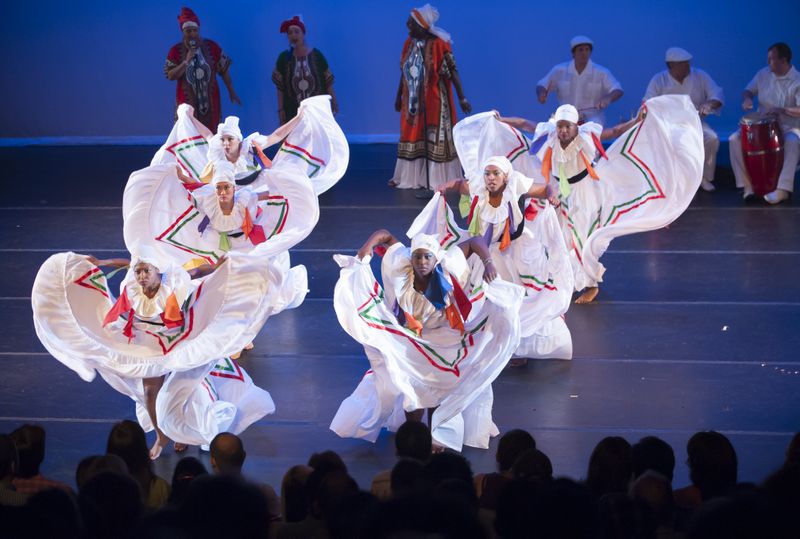 Descendants of the African diaspora used music and dance to tell stories of the joys and sorrows of their new lives across the Americas and the Caribbean. Despite attempts to eliminate communication, enslaved communities found ways to share information and give expression to their existence. Through song and music such as Afrobeats and Calypso, enslaved peoples used hidden codes in the words or meanings of their songs.While this part of our collective history is tragic, the Year of Return sought to celebrate the many contributions of the people who were taken from Africa against their will. For example, they commanded a language they had never before heard and used it to write poetry and plays, birth entirely new genres of music, and fight for social justice.

History and the Diaspora

Week 4: The Year of Return

The “Year of Return, Ghana 2019” was a prominent spiritual and birthright journey that invited the global African family home to the African continent. Initiated by the Ghanian government and adopted by other West African countries, the Year of Return was conceptualized as a way to mark the 400th anniversary of the arrival of the first enslaved Africans in Jamestown, West Virginia.

While this part of our collective history is tragic, the Year of Return sought to celebrate the many contributions of the people who were taken from Africa against their will. For example, they commanded a language they had never before heard and used it to write poetry and plays, birth entirely new genres of music, and fight for social justice.

Another form of language and communication was found in food. Both enslaved and free Black Americans survived on food that was scarce, discarded, or unwanted. Adding the memories and vignettes of their African roots and heritage, they created, influenced, and popularized cuisine that has defined not only American culture across the country, but celebrates the cumulative resilience of all the victims of the trans-Atlantic slave trade who were scattered and displaced throughout the world in North America, South America, the Caribbean, Europe, and Asia.

James Hemings (1765-1801) was a chef to Thomas Jefferson, trained in Paris, yet he was born into slavery and lived much of his life enslaved. At thirty years of age, he negotiated for legal emancipation and began his life as a free man. He traveled and pursued his career as a chef, but unfortunately his career and life in freedom were short due to his tragic and untimely death at age thirty-six.

While in Paris, James Hemings was trained in the art of French cooking. After three years of study he became the head chef at the Hôtel de Langeac, Jefferson’s residence that functioned also as the American embassy. Here his dishes were served to international guests, statesmen, authors, scientists, and European aristocrats.

Hemings – along with many other highly trained enslaved individuals who succeeded him in Washington and at Monticello – serves as inspiration to modern-day chefs and culinary historians alike, and these early African American chefs helped create and define American cuisine as we know it today.

Sourced from:
https://www.yearofreturn.com/
High on the Hog, Netflix original documentary. Episode: 3 “Our Founding Chefs”, aired May 26, 2021, by Stephen Satterfield

History of black wealth in America

Week 3: The Color of Wealth 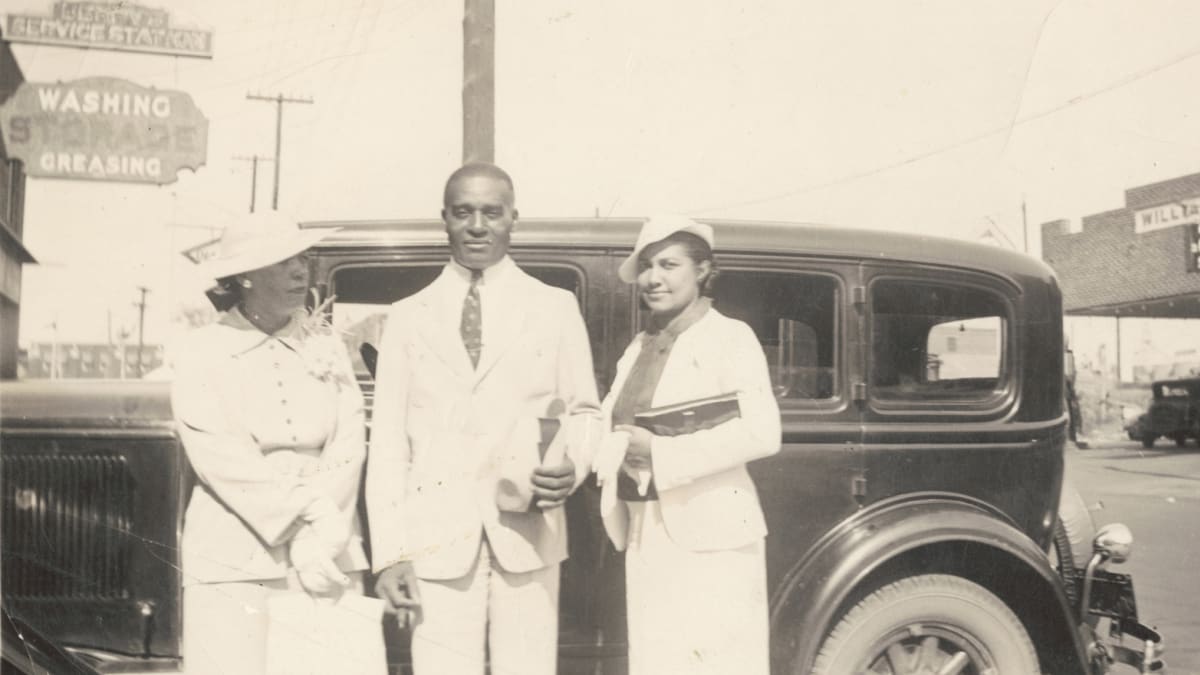 In 1711, Wall Street was designated as the location of New York City’s slave market. Given the significant role that slavery played in the economics of the thirteen original colonies, this quickly established the financial center of gravity in the young city. Stock trading as we now know it began with the trading of enslaved Black bodies.

Black-owned businesses originated well before slavery was abolished. However, emancipation permitted Black business owners to operate within the American legal system beginning in the Reconstruction era (1863-1877). The most rapid growth in Black-owned businesses came in the early 20th century, prompted by Jim Crow segregation. Black Americans who were forced into more homogenous segregated communities could now establish businesses within communities large enough to support them. The National Negro Business League, founded by Booker T. Washington in 1900, opened over 600 chapters around the country by 1915.

Fortunately, as Black Americans’ freedom was recognized, they formed their own communities, including one known as “Black Wall Street” in Tulsa, Oklahoma. Built on ancestral lands of the Creek nation, the community grew and flourished as a Black economic and cultural mecca until May 31, 1921. On that day, armed rioters, many deputized by local police, looted and burned down businesses, homes, schools, churches, a hospital, hotel, public library, newspaper offices and more. This assault left as many as 10,000 Black Americans homeless and destroyed property, assets, and wealth that families had earned over generations.

The incident stands as one of our nation’s most horrific acts of racial violence and domestic terrorism, and is a harrowing example of the systemic, racist challenges faced by many generations of Black Americans as they strive for economic stability and independence. 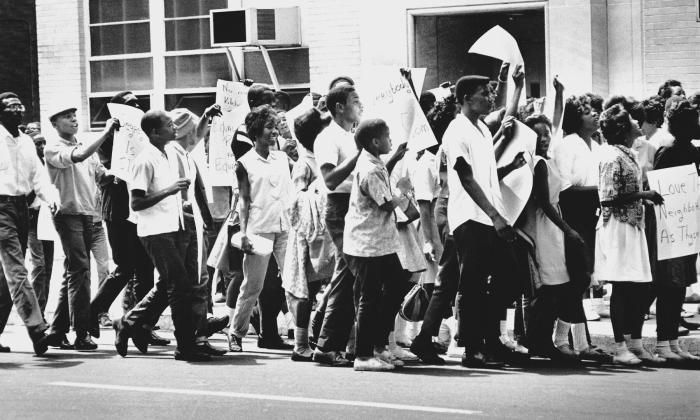 Throughout American history, Black youth activists have shown the world that while they may be small in stature, they are brave and powerful enough to make big changes. Students, including ours, have mobilized to make their voices heard. Get ready to be inspired by these stories of changemakers from the civil rights movement to the Flint water crisis.

In 1960, Ruby was the first Black student to desegregate the all-white William Frantz Elementary school. Although she was one of four black children participating in this history-making change, she was the only one who was doing it alone. She remained calm and courageous in the face of hatred and threats from people who did not support desegregation, attending school every day and making it possible for other children to follow in her footsteps.

When Ayanna Najuma was 7 years old, she participated in the Katz Drug Store Inc. sit-ins in Oklahoma City. A sit-in is a form of direct action that involves one or more people occupying an area for a protest, often to promote political, social, or economic change. Protestors gather conspicuously in a space or building, refusing to move unless their demands are met. She and other young African-Americans did so for the next seven years until the Civil Rights Act was passed.

At the age of 15, Claudette Colvin was arrested and jailed in Montgomery, Alabama, for refusing to give up her seat for a white person on a segregated bus. Colvin’s act of resistance is believed to be the first of its kind, so why do we tend to attribute that “first” to Rosa Parks? Colvin, a teen mother whose family experienced poverty, took a more aggressive approach to her refusal and was viewed as “too emotional” to be the face of the movement. Colorism also played a role in the retelling of these events. Nonetheless, her courage inspired other activists including Rosa Parks.

In 2016, Mari, also known as “Little Miss Flint”, wrote a letter to Barack Obama that moved him to visit Flint, Michigan where the drinking water was contaminated with lead and possibly Legionella bacteria. Obama’s visit ultimately led to him approving $100 million dollars in relief funding for the city of Flint.

History of Education for People of Color 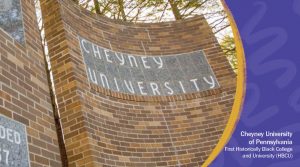 The first HBCUs were founded in Pennsylvania and Ohio before the American Civil War (1861–65) The goal was to provide higher education to disenfranchised African Americans in the United States, who were otherwise prohibited from attending most colleges. The long list of successful African Americans who attended HBCUs include civil rights leader Martin Luther King, the first African American US Supreme Court Justice Thurgood Marshall, Vice president Kamala Harris, and media mogul Oprah Winfrey. Supporters of HBCUs say they are not only important for African Americans, but for all of society. As blacks were generally barred, particularly in the South, from established institutions, critics questioned whether separate schools in fact hindered efforts toward social and economic equality with whites.

Another issue was whether vocational training or a more classically “intellectual” education would best serve the interests of African Americans. Booker T. Washington, an exemplary supporter of vocational training, founded the Tuskegee Institute. The most prominent exponent of an intellectual approach was the Harvard University-trained sociologist W.E.B. Du Bois, who argued for the necessity of cultivating a “talented tenth” of well-educated community leaders.