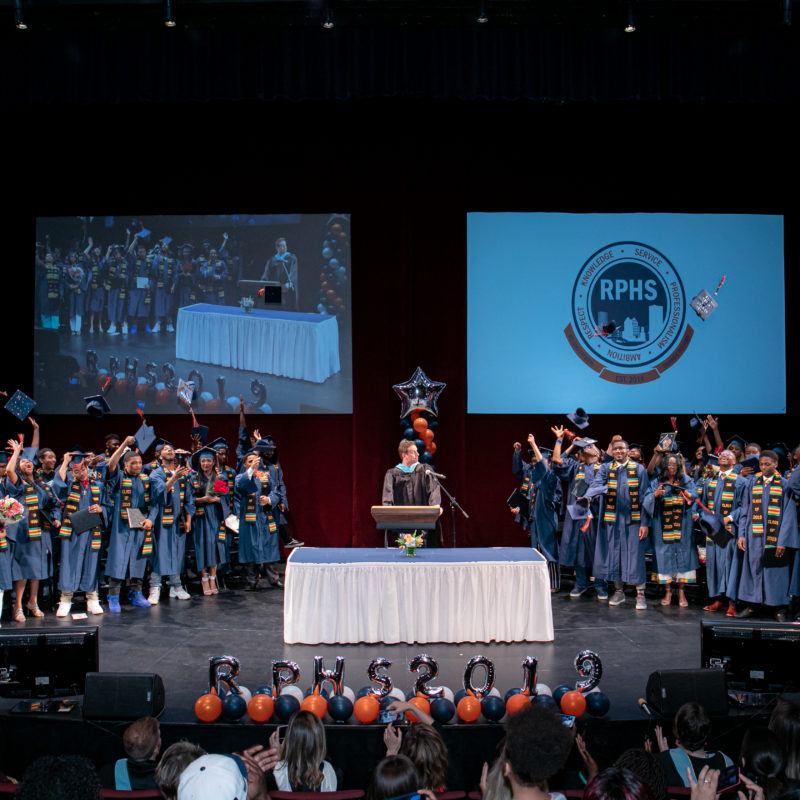 Susan Spencer, a geometry and algebra teacher at Uncommon Schools Rochester Prep High School, recently spoke with Evan Dawson, host of Connections on NPR, about her first year of teaching.

“I was surprised by how purpose driven this work is for so many people. I’ve never worked in a profession where people were so dedicated to the same mission and the level of support that I receive has been amazing — professional development, mentorship, coaching sessions. I really have to hand it to my kids. I didn’t know they were going to change my life.”

Listen to her portion of the segment below:

For the full segment, visit the Connections site and scroll down to July 17, 2019.

Below is a transcript from the segment embedded above. The transcript has been edited for clarity.

ED: Susan Spencer is an algebra and geomtery teacher at Rochester Prep High School, just completed Year 1. What convinced you to do this?

SS: Well, Evan, I am a high school dropout who eventually earned a Ph.D. With that Ph.D. I adjuncted at RIT for three years, teaching experimental physical chemistry. What I found while I was teaching there was a lack of women and minorities in the STEM curriculum. It broke my heart as a woman in STEM and I wanted to help in a way that was closer to the problem. I started looking around for high school positions and I applied at Rochester Prep. It’s been amazing ever since.

You go back about a year now, when you’re getting ready for that. What do you think surprised you or what did you learn most in Year 1?

I was surprised by how purpose-driven this work is for so many people. I’ve never worked in a profession where people were so dedicated to the same mission, and the level of support I received has been amazing — with professional development, mentorship, coaching sessions — but I really got to hand it to my kids. I knew they were going to be great. I didn’t know they were going to change my life and change who I was as a human being.

Give me your best moment, or something that really stands out to you.

There’s a silly one and a serious one. The silly one would be when Old Town Road first broke and our whole class sang it together. These are ninth graders, They take themselves fairly serious sometimes but this was a moment that we just let loose and it was fantastic. The more serious side, my best academic moment was in a geometry class. We were learning about circles and one of my students raised her hand and said, “wait, Dr. Spencer, is this why the circumfrence is equal to 2-pi-r?” I freaked out. Like, “yes, this is it!” This kind of understanding just rippled through the class until the very last kid stood up out of his seat and said, “I GET IT NOW!” Those moments of deep academic passion from these kids just keep me coming back every single day.

There’s a moment at the beginning of every unit or lesson — you know these kids are capable — but you have to ask yourself, “am I going to see this moment? Is this going to happen?” It has to be almost indescribable when you get that click, particularly if it’s in a student who’s had to work hard than their peers.

I think the click is really important and as teachers, one of our strongest assets is the ability to pivot and move, and adjust what we’re doing so that more and more kids have that click. I started a unit on quadratic functions on what I thought was the way to start the unit. I lost about half the class. We reorient. We respond to the needs of our kids. We’re not just driven by data. We’re driven by what see every day in the classroom so we can get 100 percent of that classroom to college and beyond.

That takes some vulnerability and humility because no teacher walks in with an idea of how they’re going ot teach something, and midstream has to go, “well, it’s my fault, not their fault. This is not working and I’m going to change quick.” That takes humility.

It does but it’s also just informed behavior. It’s teaching from the perspective of a scientist. If you’re hypothesis isn’t supported by data, you don’t get mad at the data. You change your hypothesis and retest it. For me, it’s just a natural way of doing things because of my background. It can be hard. It can be embarrassing if one of my coaches or my principal are there watching me and I have to course correct in the moment but it’s growth. I know that my coaches are there to help me grow so I can help the kids grow.

Let’s get real. Give me a moment in your first year of teaching that really rocked you, that was really hard.

There’s been a lot. I have one young lady who lost a significant number of family members to a variety of things and really struggled at school. It was heartbreaking. It’s the type of thing that if one of my daughters was going through I would be devasted and doing everything I can. There were multiple moments like that. The silver lining is that the kids felt safe to come and problem solve with me, to try and figure this out. They are amazing young people and you want everything to go so well for them that when the world knocks them down a little bit, sometimes you just don’t know what to do.

Does our society judge kids too harshly without knowing what they’ve been through?

Yes. Unequivocally, yes. Especially the way that society judges teenagers. If you’ve forgotten what it means to be a teenager — the amount of cognitivie development that’s happening at a rapid pace, physical development, emotional, hormonal changes — they have so much going on just from a biochemical perspective and then you put them into environments that, if you’ve forgotten about or you’ve never visited, then yes, you’re going to be hyper-critical of the kid who takes a couple tries to pass the Regents. But you don’t know that the test he started with that day is he got to school. He got there. Period. And that was a huge success for him because of what he had to walk through to get to the school.

You’re going to stay with this profession?

I’ve found my calling. I love it. I’ve never had a better job in my life.

Where would you fall on the survey that teachers are underpaid or aren’t paid fairly?

I’m satisfied at my school because I know how it all works. I know the path forward. I know how things evolve and change for teachers as you move from first year to something else. In terms of colleagues across the country? I don’t know if it’s so much the fair pay as the fair treatment. We’re treated horribly in the media sometimes and I look at, for example, how teachers are treated in Japan. I’m not saying we need to go to that point but to have more respect for the profession and for the impact that the profession has socially and politically would go a long way towards teachers who aren’t being paid failry yet. It’ll go towards pushing that fair pay happening.