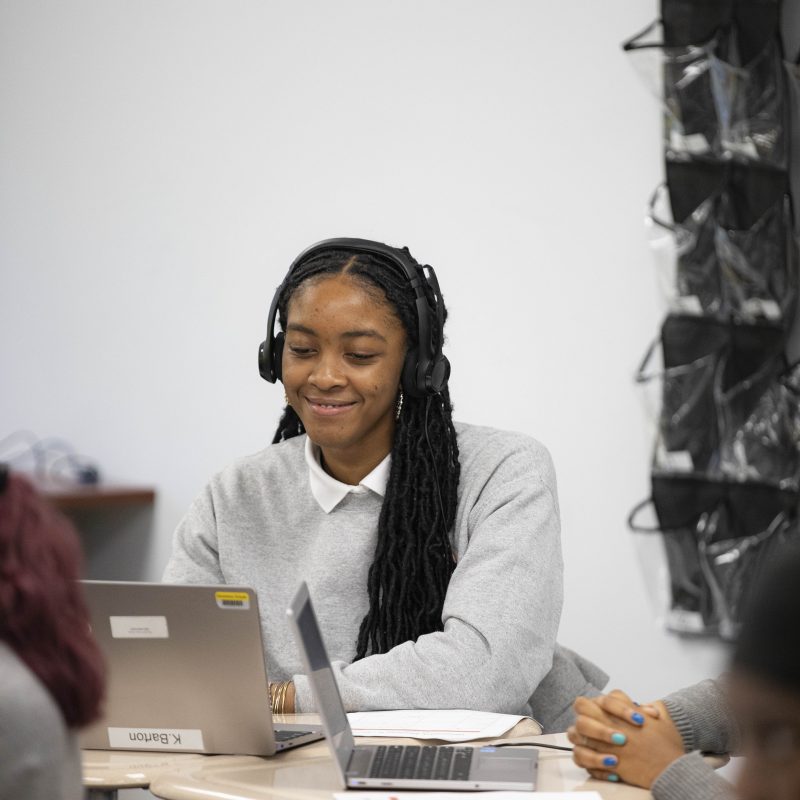 In this Rochester Democrat and Chronicle Op-Ed, Ronald L. Zarrella discusses how a partnership between the Rochester Institute of Technology and Rochester Prep is helping students experience the rigors of academia, learn exactly what it takes to be successful in college, and discover fields of study that they may not have even considered as high school students.

As a teenager, Justice Marbury worked with an award-winning photographer and professor at the Rochester Institute of Technology, Joshua Meltzer, sitting in on some of his classes while she was still in high school and being coached directly by him on her own photography.

The opportunity made a difference in her life. Today, she’s working as a Democrat and Chronicle photojournalist, after attending RIT on a full scholarship, and is also teaching photography to students at her old high school.

Justice’s opportunity to work with such an expert at a major university was unusual. But it shouldn’t have been.

Justice gained this experience through a partnership between RIT and her school, Rochester Prep, a K-12 public charter school serving over 2,000 Rochester students who are predominantly Black and Latino and from low-income neighborhoods.

The partnership was born of a commitment from RIT to create a stronger connection to inner city schools.

In 2007, shortly after becoming president of RIT, William Destler saw the importance—and the responsibility—to engage Rochester public schools to ensure a broader range of students had access to a place like RIT. In 2009, the Destler Johnson Rochester City Scholars began providing scholarships for graduates of Rochester schools to attend RIT if they could meet the academic standards for acceptance.

The scholarships were a great first step, but then RIT went further. The thought back then was – what if we actually brought high school students on campus to work on projects with professors?

As a corporate executive for some of the world’s largest companies, I saw first hand how hard it was to find enough top-quality job candidates, from entry level all the way through top management positions. Over time, it has become increasingly difficult to hire people with the right kind of skills, especially in jobs that require technical expertise.

As a nation, we do very little to systematically ensure we are preparing all young Americans for an equal shot at the best jobs and boardrooms. There is only one way to do this: give all kids a fair chance at a high-quality education and the pathways to see themselves in colleges and universities.

We’re not doing too well in that area. Today, fewer than 15% of students from the lowest-income families graduate from college. Not only is that appalling, it has economic implications for our country. It has been more than a decade since McKinsey revealed that if the U.S. had closed educational-achievement gaps by 1998, its GDP in 2008 could have been $1.3 trillion to $2.3 trillion higher. The loss of economic opportunity has gotten much worse since.

The partnership between RIT and Rochester Prep started in 2014 and now, nearly a quarter of Rochester Prep’s seniors are involved in a capstone project at RIT. These students are doing college- level research for a semester or longer under the tutelage of RIT professors and mixing in with other college students. The program was opened to high school juniors last year.

The impact of this program has been profound in many ways. First, students are experiencing the rigors of academia and learning exactly what it takes to be successful in college. They are also being exposed to fields of study that they may not have even considered as high school students.

Evidence of the life-changing impact this partnership is making abounds.

Working under professor Andre Hudson in a science lab at RIT in 2019, three Rochester Prep students made a surprising discovery of a rare bacterium that kills e-coli. The three students were included as co-authors on a scientific paper published in the American Society for Microbiology’s Microbiology Resource Announcements.

The program has become a pipeline for graduates of Rochester Prep to attend RIT. Since it started, nearly 40 Rochester Prep graduates have attended RIT on scholarships and some have already graduated and are now working in diverse fields. I would have been thrilled to hire them when I was a corporate executive. Among those who enrolled, there is a 77% persistence rate.

RIT’s collaboration with Rochester Prep should serve as a national model for other institutions of higher learning. I encourage more colleges in America, especially those located within cities, to collaborate with their nearby high schools to prepare students from low-income communities for success in college and beyond.

RIT and Rochester Prep have created a playbook that’s working. Other universities have had similar successful engagements. There just aren’t enough of them.

Ronald L. Zarrella is chairman emeritus of Bausch & Lomb, having served as its chairman and chief executive officer from 2001 to 2008. Prior, he was president of General Motors North America. He is a trustee of Rochester Prep and Rochester Institute of Technology.