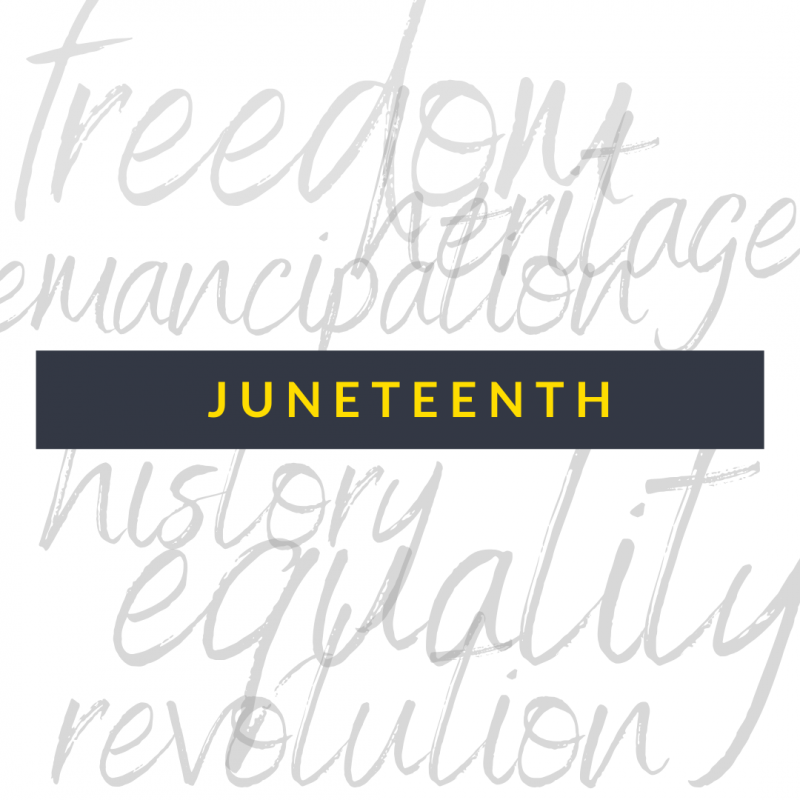 I am truly thankful for the opportunity to write to you on this day: June 19, 2020. As I write this, monuments of history told from a single story are coming down all over the world, as people refuse to continue to accept a single version, a single truth, a single lens on their shared stories. On the surface, this could be a monumental accomplishment for the history of this country. The question I am left thinking about is what will replace that single story. I was raised on single truths, single historical versions that had defined who I thought I was and what information I had about my beginnings as a Black woman in this country. As the monuments to that single story fall, we have an opportunity to replace that story with something more inclusive and more complete. Perhaps that is the power of Juneteenth.

Juneteenth is celebrated in commemoration of the ending of slavery in the United States. This was after the President’s Emancipation Proclamation, which had become official on January 1, 1863, and announced that all enslaved people would be free. The expectation was that the ending of slavery meant the beginning of freedom, but that, of course, was untrue.

Two and a half years after this Proclamation, it still took the surrender of General Lee and the force of General Granger and his regiment to ensure that all states, Texas being the last, ended slavery according to the Proclamation:

The people of Texas are informed that in accordance with a Proclamation from the Executive of the United States, all slaves are free. This involves an absolute equality of rights and rights of property between former masters and slaves, and the connection heretofore existing between them becomes that between employer and hired laborer.

I’ve read that the reactions to this news ranged from shock to excitement and joy. People were exhilarated by the expectation that freedom was given and that slavery was the beast that was finally slain to bring it about. That single story was fiction.

While the institution of slavery was legally dismantled with the 13th Amendment to the Constitution, the arc of systemic racism still flowed through the veins of this country as it does now. The sad truth is the question that needed to be asked was, “Free to do what?” Being free to exist within a system that was designed to work against them is no more than the freedom we grant a fish to swim in a tank we designed for him. It was an expectation that was small, an expectation that only began on this day in 1865.

So as thrilled as I am that we are finally as a country starting to confront and recognize the single story we celebrated for so long as the land of the free, I struggled with how to honor this day appropriately. A day that is sandwiched, somewhat ironically, between the Memorial Day which celebrates those soldiers who died for this country, and Independence Day, July 4th to celebrate the country’s own independence and freedom. As Black Americans, both holidays have significance to our history, but always with the faint tension of whether it was actually ours to celebrate.

I only learned about Juneteenth maybe 15 years ago in a book my husband recommended. I actually remember glossing over it as just another factoid stamped on a page as something that happened as the result of the Civil War. In fact, to read that people were so happy about being granted freedom, I actually cringed a bit. Not because I didn’t understand their joy, but because I knew how their story continued. I knew that they would continue for another 150 years in a world where their Blackness was criminalized, where race was weaponized, where they were invisible. But deep down I knew there were more stories. There had to be more.

Juneteeth, however, is a direct challenge to that single story. If we want to challenge a single story, we have to confront the past and tell all of its truths. The truth is that my people celebrated this day 155 years ago because it represented their freedom. They were free to openly love and marry who they wanted. Free to earn money and own property. Free to see family members they were separated from. Free to learn to read and educate themselves. Despite the challenges that they faced and would continue to face, this small window of freedom, granted on this day, enabled them to move forward, to push for change.

In the past few weeks, I have seen many communities across the world coming together in unity and recognition that our long-lived expectations have not been met. We are unifying around the need to redefine what freedom is, we are unifying around what it takes to get us there, and we are beginning to do the long work of reshaping it.

As we consider the direction our society is moving in now, but on the wave of the destruction of Black lives, I can only hope that in this journey we are using the tools of self-reflection, grit, perseverance, and empathy, to continue to define the freedom we want as humans.

So the answer to that question of “Free to do what?”, I say we are free to educate and learn all the stories and free to change the story in the direction and path forward towards an equitable future for all.