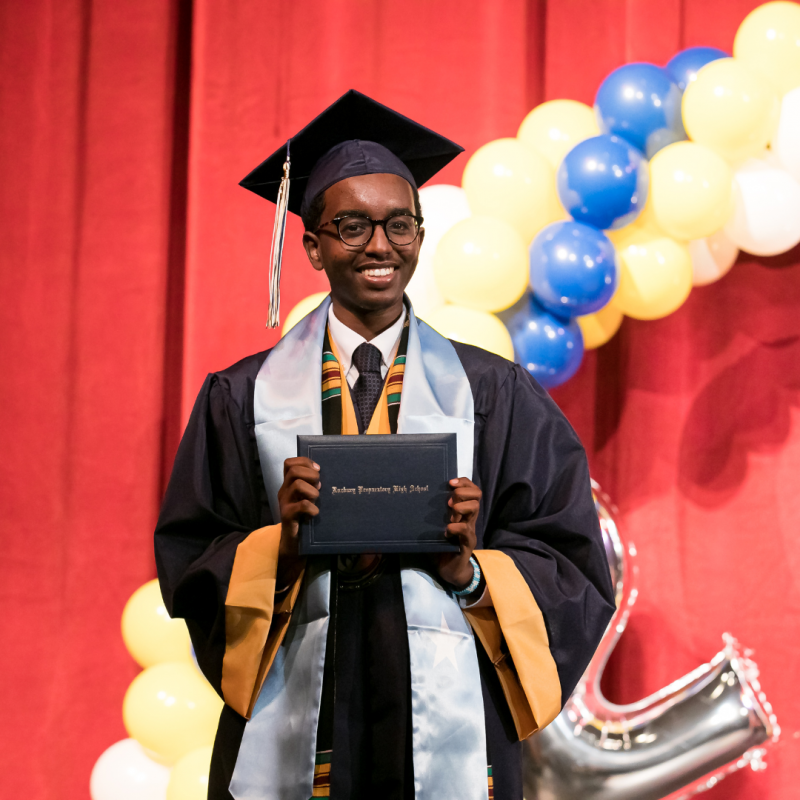 Mission Hill Graduating Senior Looks Towards a Career in Health Science; Will Attend BU in the Fall

Mission Hill resident Wahaaj Farah is gearing up to attend Boston University in the fall, after graduating from Roxbury Prep on June 1.

Farah was an active participant in Roxbury Prep’s High School 2.0 program during his high school years, where he took part in Quiz Bowl and debate. He was also Roxbury Prep’s only member of the Mayor’s Youth Council, working his way up to the Director of the Public Health Committee. Now, he is prepared to further his passion for public health through his upcoming studies at Boston University.

Farah recently participated in the annual Senior Signing Day rally, which “is an inspirational pep rally celebrating the accomplishments of all graduating Roxbury Prep High school seniors,” according to a spokesperson for Roxbury Prep. Students walk across the stage holding a T-shirt or a pennant that shows what college they will be attending, or what is coming next, all while their favorite song plays in the background,.

“This is the most anticipated event of the year for students and serves to inspire younger students to work hard toward their goals,” the spokesperson said.

During his sophomore year, as part of the High School 2.0 program, Farah said he joined the Quiz Bowl, but switched to debate during his junior and senior years.

According to a spokesperson, “Roxbury Prep’s High School 2.0 program takes learning outside of the classroom. A mix of co-curricular classes, activities, clubs, and competitions, the High School 2.0 program aims to enable students to learn through ways that support self-discovery—an essential skill for development during and after the pandemic.”

“It was really fun to explore so many options and I stuck with debate for junior and senior year,” he said. When the pandemic hit, it became more difficult to keep up with the practices, but he said he and the other students persevered and were able to pull it off.

“Overall, High School 2.0s were amazing,” he said, and chose debate because he wanted to polish up his public speaking skills. He said being on the debate team helped him to “really see what my public speaking style was,” and “how I interacted with others” and built connections and networked.

He also learned how to craft arguments and work well with others, skills he says will translate into his college career and beyond.

During his junior year, he decided to take his skills outside of the classroom and into the real world. Farah canvassed for then-mayoral candidate Andrea Campbell as well as then-City Council candidate Said Abdikarim. He said this is his “fondest memory” of high school school years.

He said that he remembers “feeling accomplished and knowing that my senior year, I’m going to start strong, which I did.”

During an awards ceremony for juniors, Farah was presented with the “Agent of Change” award. “My teachers and other students recognized the work that I did both inside and outside of school,” he said, which “not only motivated me, but pushed me to do what I have to do.”

When he was in eighth grade, Farah said he was referred to the Mayor’s Youth Council, and was interested in the opportunity. He explained that there was a group interview, and “we had to develop a project in groups, and the whole point of this interview was to see who would stand out from the crowd.”

He said “that moment; that interview in specific; that project really taught me that it takes a team to build a project.” He knew from that moment that being on the Mayor’s Youth Council was something he was very interested in, especially as he transitioned to high school from eighth grade.

Everyone on the Mayor’s Youth Council begins as a youth ambassador, he explained, but there are also elections for Deputy Director and Director of different committees on the Council.

During his freshman year, he decided to just remain a youth ambassador so he could learn more about how the Council worked. By his sophomore year, he wanted to “take on a leadership position,” and ran to be the Deputy Director for the Civic Engagement Committee.

He lost that election, but that did not stop him from continuing to put his best foot forward and work hard as a youth ambassador.

By his junior year, he ran to be the deputy director of the Public Health Committee, and won the seat. “I was so excited,” he said. “I was really happy about that accomplishment.”