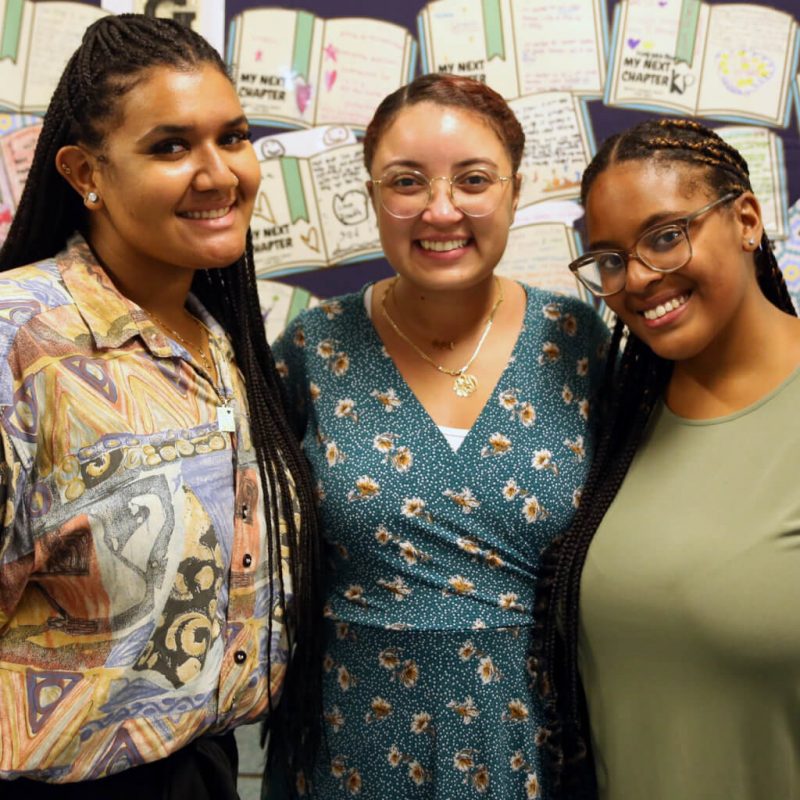 Between her junior and senior years at DePauw University in Indiana in 2014, Estrella De La Torre spent the summer at an elementary school in Brownsville as a Summer Teaching Fellow.

At the time, De La Torre had no interest in becoming a teacher, but a fellow student told her it was a cool thing to do.

“My degree was psychology and economics,” she said. “I thought I was going to do something corporate, 9-5.”

One of the first things she saw when she got to Uncommon Schools Leadership Prep Ocean Hill was the morning motivation when students gather in the gym in what looks like a huge, academic pep rally. Students were energetically sharing what they had learned in the past few days, affirming their peers, and talking about their roads to college.

She was impressed by what she saw in the school.

“I grew up in Brooklyn and I never had teachers like this who expected things for me or believed in me like these students were believed in,” she said.

During that summer, she spent time in the classroom under the tutelage of an experienced master teacher who gave her tools to inspire students along with lots of real-time feedback that allowed her to correct her mistakes.

“That summer I failed miserably, I was not good, but I was coached and inspired and pushed,” she said. “By the end of it, I had received so much feedback and so much support that I felt like I really could take it on in my first full year and that’s why I signed on.”

After graduating from DePauw, De La Torre returned to Leadership Prep. She became a teacher and rose quickly through the leadership ranks, ultimately becoming the school’s principal.

This summer, she welcomed four Summer Teaching Fellows into her building, hoping they too decide to become teachers, if not at her school, at one of the other 23 Uncommon Schools in Brooklyn.

The Summer Teaching Fellows program has become a major pipeline for recruiting new teachers, especially teachers of color, and has allowed Uncommon Schools to diversify its teaching ranks. More than 60% of Uncommon Schools educators are people of color.

Rosa, who is majoring in early childhood education, grew up in North Philadelphia and has wanted to become a teacher ever since she was a young girl.

“As a kid, when you act like your role models, I found myself practicing being a teacher in the basement with my siblings. I was a teacher and they were two students,” she said.

Rosa said being at Leadership Prep has reinforced her decision to become a teacher.

“I definitely do want to go into teaching, and I definitely want to teach the students I’m seeing here — Black and Brown students in low-income neighborhoods,” she said. “You can just tell that here, all the teachers really care for their students’ futures and they just work really hard with them to figure out who they want to be.”

READ MORE IN THE BROOKLYN PAPER